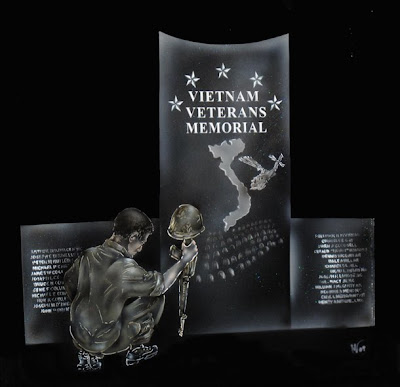 http://nyvietnamvets.org/
1961 Vet Classic – Owner John F. Svandrlik
I bought this 61 Corvette in 2005 as a project. When I bought this Vet, it was all apart in boxes. In the process I went from a mono radio to a stereo. I installed the new speakers in the kick panels. Now I needed to come up with something to put in the original hole in the dash. One day while looking at my other car, which has a POW/MIA plate on the front the idea came to me.
I took another plate and cut it to fit into the original speaker frame. I received many positive compliments from fellow vets. I then had “59 All Gave Some Some Gave All 75” painted on the rear panel above my VVA license plate. I felt I needed to do more, and it came to me at our chapters Memorial Day service at the local Vietnan Veterans Memorial.
I contacted a local airbrush artist, Mi Chelle Vara, from Wilton with my idea .She was very enthusiastic about it as you can see she did a fantastic job. I have brought the car to many shows since I completed her in 2008. There is still room on the lower panel inside the hood for a future addition.
I served a tour in Vietnam in1967 with the U.S. Navy, was assigned to the Inshore Undersea Warfare Group 1, on a patrol boat, as a crew member. It is an honor to share these images with my brothers in NY VVA.