News and commentary from Rick Romancito, arts and entertainment editor of The Taos News
http://chulaspeaks.blogspot.com/2006/02/tony-magar-energized.html
http://photos1.blogger.com/blogger/2979/1931/1600/magar2.jpg 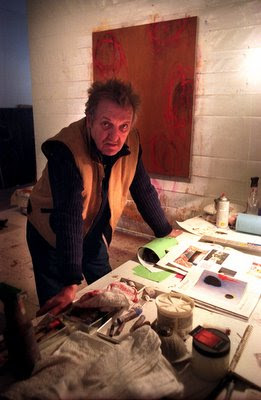 Tony Magar in his Taos studio. Photograph by Rick Romancito

No, your kid can’t do better.

Not unless they’ve become immersed in the world and creation of serious art and worked for years understanding its complexities. In short, making art is not an easy process. It is work, just as hard and torturous as digging a ditch, peeling latillas or sitting through legislative budget committees.

And being a serious artist doesn’t necessarily mean making beaucoup bucks through online marketing or corporate sponsorship. The yardstick for success isn’t straight line level in the art biz. It’s more like a tumbleweed, branching out sharp all which-way, only to get stuck under a Lexus zooming like a bat out of Vegas, with the driver wondering aloud “What’s burning?”

Which is one of the reasons an artist like Tony Magar might still be considered slightly eccentric. He is serious about art. And that’s why he lives in Taos.

Magar is back from New York City, where he was feted with an exhibition titled “The Absentee Universe” (Oct. 20-Nov. 26, 2005) at the Mike Weiss Gallery. It was a blast, he said, being back in that tilt-a-whirl madness and high end thrill-a-minute cool.

“It was right in Chelsea,” he said in his studio off Gusdorf Road in Taos, “and it was a good time to show there. It was a very active time to go there. I lucked out. In terms of the time and the kind of reaction from the people. I was happy to see a lot of old art comrades.”

He said all his peers from back in the day came to the opening, “which was nice.” Through the door there were folks like sculptor Mark Di Suvero who came, “and (painter) Ed Moses came and (sculptor) John Chamberlain was around the block having his show at the same time. So, I got to see him. A lot of artists I know came to the show. It was wonderful. I couldn’t have wished for anything better. To get that input, you know, from what they were doing and what I was doing, so there was a wonderful kind of exchange going on there. So, I really liked that a lot and it was worth going just for that.”

Part of the reason for going was to kind of feel out the possibility of moving back, he said, “but a week there was enough to convince me that I didn’t want to be there. Just so much action all the time, constantly, in terms of living, just surviving, getting through the day. There’s so much stuff. I mean, we crammed a lot of stuff in … All these events are constantly happening every day, it seems like. A lot of interesting theater stuff, and, of course, you’ve got your restaurants. People to meet. It goes on and on. I would imagine that if I lived there it would settle down a bit. You know, one toys with the idea of moving back, but then after a week I was so happy to get back here, so I could reach some level of sanity.”

The show was a success and Magar got some high profile notice in The Village Voice and a possible upcoming piece in Art in America. But it was back in Taos, where you can hear yourself think, that some of that energy was transformed into creativity. “In terms of the work,” he said, “it took a leap forward. So, I was relating to that more than anything else. It got seen, and that was the jackpot. It got seen by people there and they all were very favorable towards it … So, I came back full of energy and got to work again. The whole thing got energized.”

In an exhibit catalog put together for the Mike Weiss show, critic Michaël Amy wrote: “One drifts effortlessly into Tony Magar’s new abstract paintings, for these works suggest fluid, open spaces — ethers where things are in a state of perpetual flux. The nature of these fictive spaces is not instantly apparent however, for cursive looking discloses surfaces that at first seem opaque. Prolonged contemplation is infinitely more rewarding, for only then do the top glazes of oil reveal themselves to be translucent, disclosing layer after layer of paint — often of a different tone or color — buried underneath them. What results, is immeasurable pictorial depth.”

And there is a tactile sense of the work, that physical evidence of a constant series of decisions, ideas pushing and pulling across the surface that is only glimpsed when seen from afar. Up close, it becomes more dense and layered. You wonder: What was he thinking?

“I think one needs a certain amount of peace to create,” Magar said, “to have one’s own thoughts about your relationship to nature is totally changed immediately. You’re not wandering along looking at the beautiful blue sky and the mountains anymore. You’re trying to avoid people all day long.”

But somebody like Magar needs that fix every once in a while. “It opens you up to where your work could go, could develop and move on a little bit from where I was. But, that’s a process you have to work through.”

In a sense, he also needs that input here in Taos, where the comrades are fast disappearing over the horizon. London-born Magar used to rely on major dudes like the late great Bill Gersh and that whole posse of artists who made the 70s and 80s here a fury of activity to just talk and put the pedal to the metal.

Magar put down his thoughts on the subject to paper, calling it “Search and Destroy”:

“My friend Bill Gersh was having problems with his painting. So, I went to visit him. I could tell he was having conflicting thoughts about the paintings he was working on. We were sitting there in the studio, both eyeing what was left in the jug of wine, then, Bam!, he jumps up and grabs a coffee can of paint and hurls it at the canvas. At that moment, the destruction of the old had broken the stalemate. So, I left him with the rest of the wine. Now, he could move on and work with it.

“On the way back to town, I realized there’s a thin line between the ego and what the painting demands — to become a painting again demands passion to move on. This thought stayed with me a long time. What stops us from getting to the next layer? Fear. Or maybe the ego. The ego craves gratification. The ego demands satisfaction. The ego wants a safety net. The ego usually will settle for less. Like a bubble we’re stuck in. It stops us from moving on. I think it’s important for us as artists to watch and observe for breakthroughs in art and ourselves.

“The most exciting part of making art, for me, now, is the process of making and re-making. By that I mean not settling for the first draft.”

It may be somewhat dangerous to say so, even at this point in time (he’ll be 70 this year), but Magar said he doesn’t possess as much fear anymore. “It takes fearlessness to create — the see the new,” Magar continues in his statement, “for Gersh, for Pollack, for Basquiat. That’s the nature of the beast.”

The universe is constantly in a process of creation and destruction, integrated, he said, toward “becoming.” And, at the end of the day, “ we are all just stardust.”

Magar is still moving on and is not about to settle for anything less.

posted by coyoteboy at 8:47 AM

Magar is a genius, one of the last of the brilliant artists from the American abstract movement.